There are only a few flies from my humble beginnings that have stayed with me over the 50 odd years that I have been fly fishing, but the Gold Ribbed Hares Ear in all its various incarnations is one of them.

There are times when the original nymph pattern GRHE can be the fly of the day, but like a number of these everlasting golden oldy patterns, they have over the years creatively “evolved”, due to lovely new materials and the eclectic demands of today’s world of fly fishing!

But few flies have endured or travelled so well as the Gold Ribbed Hares Ear. I once encountered an angler’s fly box full of them in the most remote of spots high in the Rocky Mountains. Where, alongside flies like the WD 40 and miniscule size 18 and 20 Brassies,  the Gold Ribbed Hares Ear was one of the crème de la crème flies that caught the beautiful wild mountain Rainbows from those cold, lonely mountain streams. Joyous memories!

Along with the original old-time nymph pattern Gold Ribbed Hares Ear, there has always been a hackled version that never ever seemed to get any sort of publicity. Whether that was because it was maybe a local pattern, a sister to the hackled PTN that was a favoured fly at a long demised fishery called Stafford Moor, now, unfortunately, a carp fishery. But my friend John Gawesworth, father to Simon Gawesworth, would catch fish after fish on these hackled flies, often in bright sunlight. For me in my younger manifestation, it was ever part of the learning curve.

For the last couple of decades, the Cruncher Gold Ribbed Hares Ear has been one of those flies whose place is on a top dropper, when I am fishing Diawl Bach’s or Buzzers.

I truly believe that it is the silhouette and the subtle glisten of the gold rib that is the trigger. But sometimes when fishing on the hang, with the fly a couple of feet beneath the surface, I have actually seen fish home in on it, so there is something there that they really seem to want. 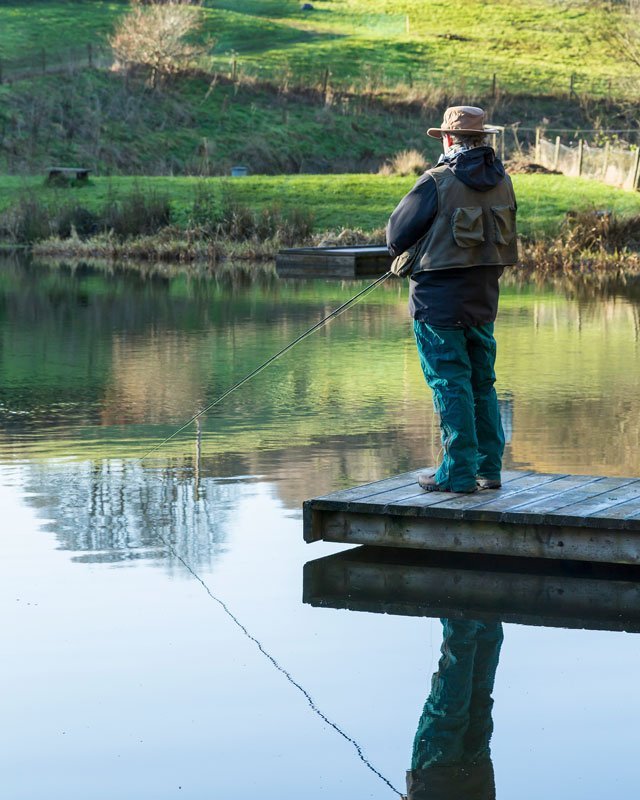 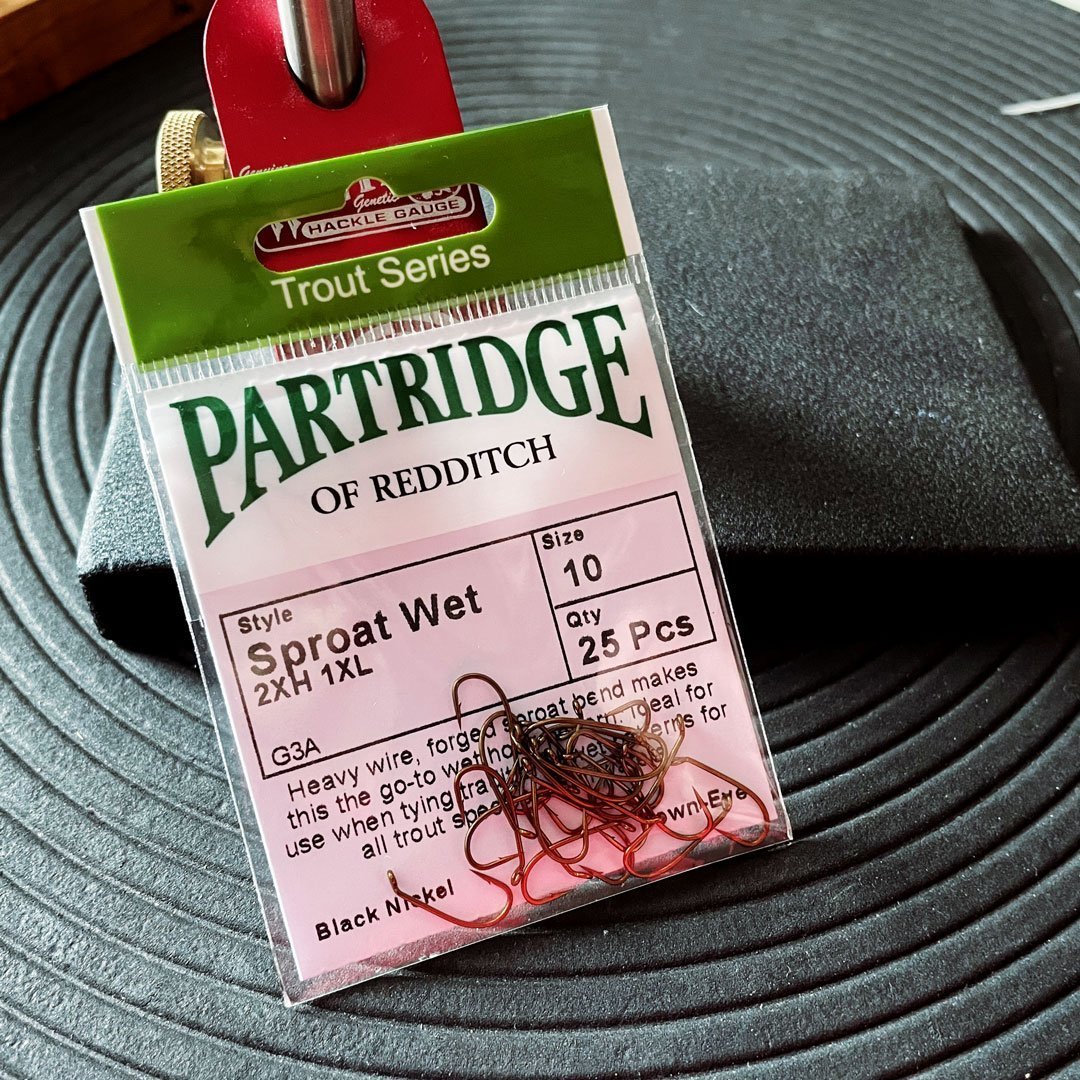 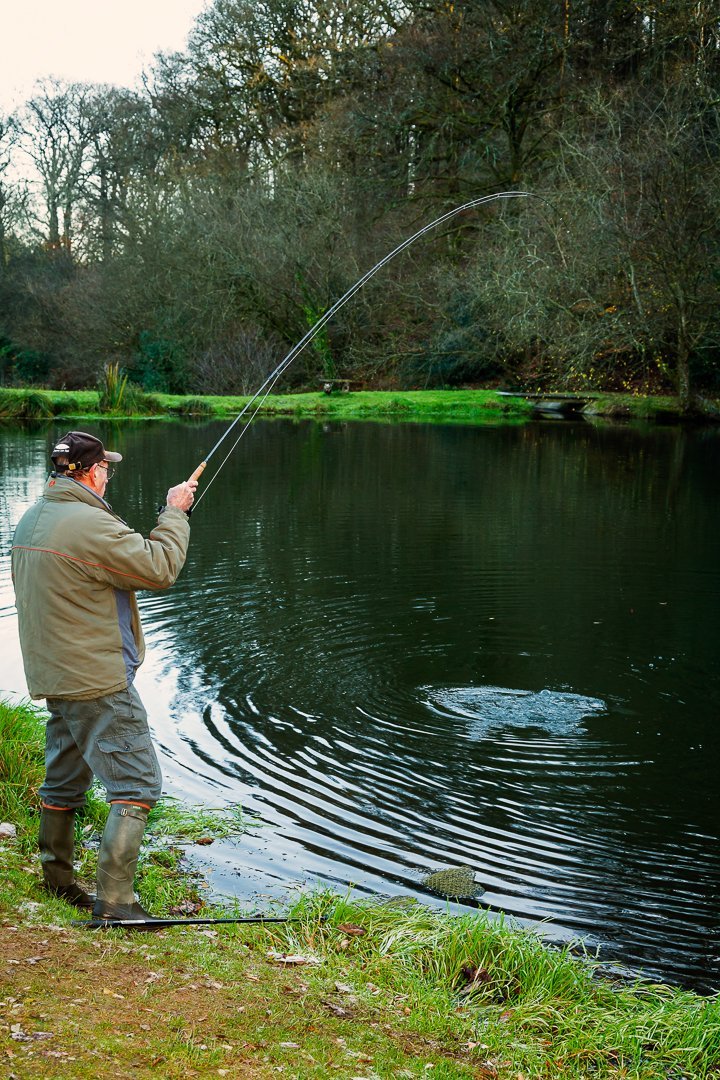 On small waters I will often fish a pair of them. On the point a flash back version which is tied with a few turns of lead to take the point of the leader down. On the dropper will be the fly with the gold ribbed tinsel body. I know that in my fly box the flashback flies are weighted and the ribbed flies are not.

If you can see fish occasionally dimpling the top then this team of Gold Ribbed Hares Ear Crunchers is a viable floating line tactic to take fish in a quiet, but sensible way.

After casting give the line a long slow pull to straighten the leader and then wait. Let the flies’ fish quietly on the drop; give them a good minute or so. Then a slow figure eight retrieve for a bit, then stop and let the flies’ fish on the drop again. Not surprisingly the bite will often come just as you restart the figure eight retrieve. The fish has probably been watching the fly, when the movement of the hackle and fly will tempt the fish to snaffle it. All good fun…enjoy.

Like a lot of these flies, once you have the materials to hand and are in the routine they are relatively easy to tie.
For the unweighted, ribbed version.

Run the thread down the shank of the hook to a point just above the barb of the hook. Give the thread a lick of varnish to settle everything into place.

Go to the Hares Mask and pluck some of the slightly darker hair for the tail whisks.

I usually pluck the hair from between the eyes; it seems to lay a bit straighter. Remove the under hair and tie in about a dozen or so hairs for the tail. As you run the thread back to the tail, trap in the gold tinsel for the rib. I use the “small” size gold  tinsel which seems proportionate to the size of the fly.

On a Hares mask there is always a lot of under fur, so what works for me is to take a pinch of the darker under fur, remove any long guard hairs. Then go the ear and pinch out enough of the short ear fur and mix it with the under fur until you have sufficient to tie a couple of flies. Mix the proportions with your fingers till the dubbing looks how you want it.

Wax the thread and stick the Hares Ear dubbing to the thread until it is evenly distributed. I then catch in my dubbing whizzer and make a dubbing loop. Spin the whizzer till the fur is reasonably tight and then wind the fly body, being careful to stop the dubbing, leaving room for a couple of turns of Peacock herl and the Greenwell or Badger hen hackle.

Tie in the peacock herl, taking two or three turns ensuring there is room for the hackle.

For the Flashback weighted version.
Roll on about eight to ten turns of fine lead wire around the shank of the hook, tie down and varnish. Then after tying in the tail, fasten the tinsel for the flashback and the fine wire to rib it. Make the body, bring the tinsel over the back of the body and tie it down. Rib the body in open turns with the fine gold wire, then carry on with the peacock herl and hackle the fly to finish. 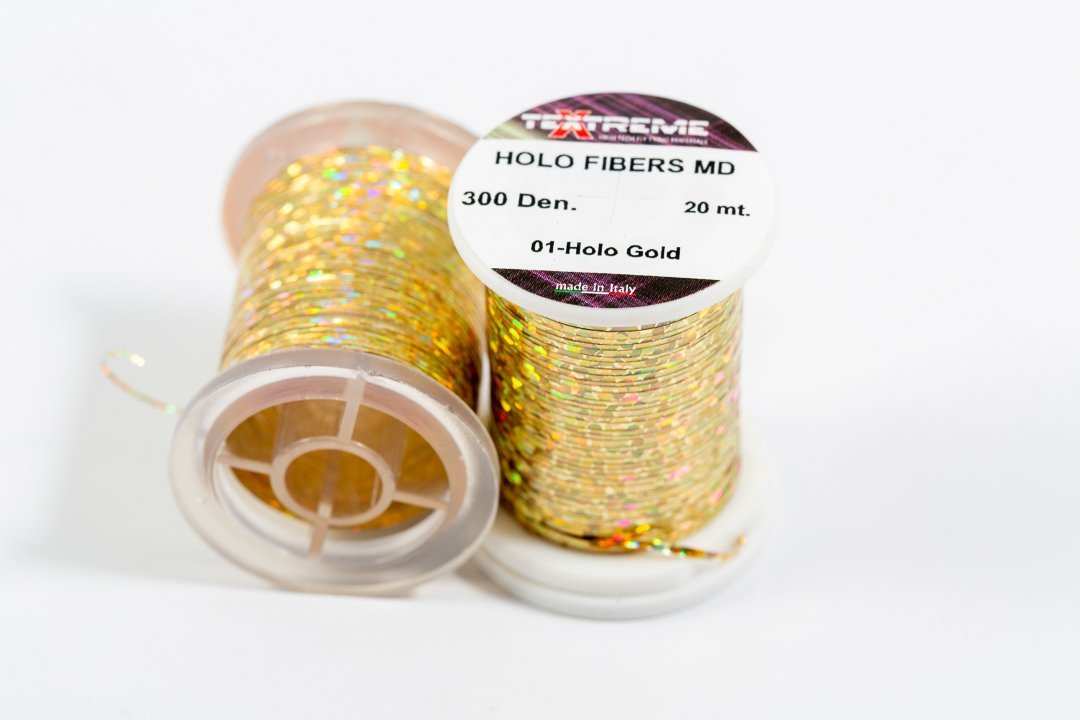 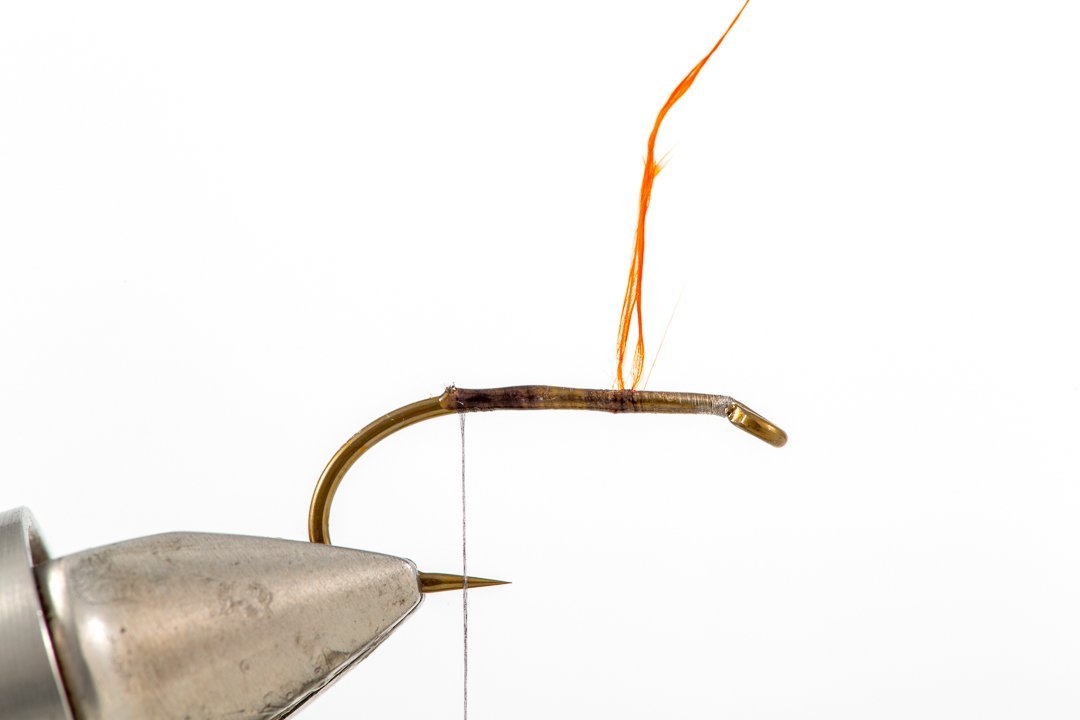 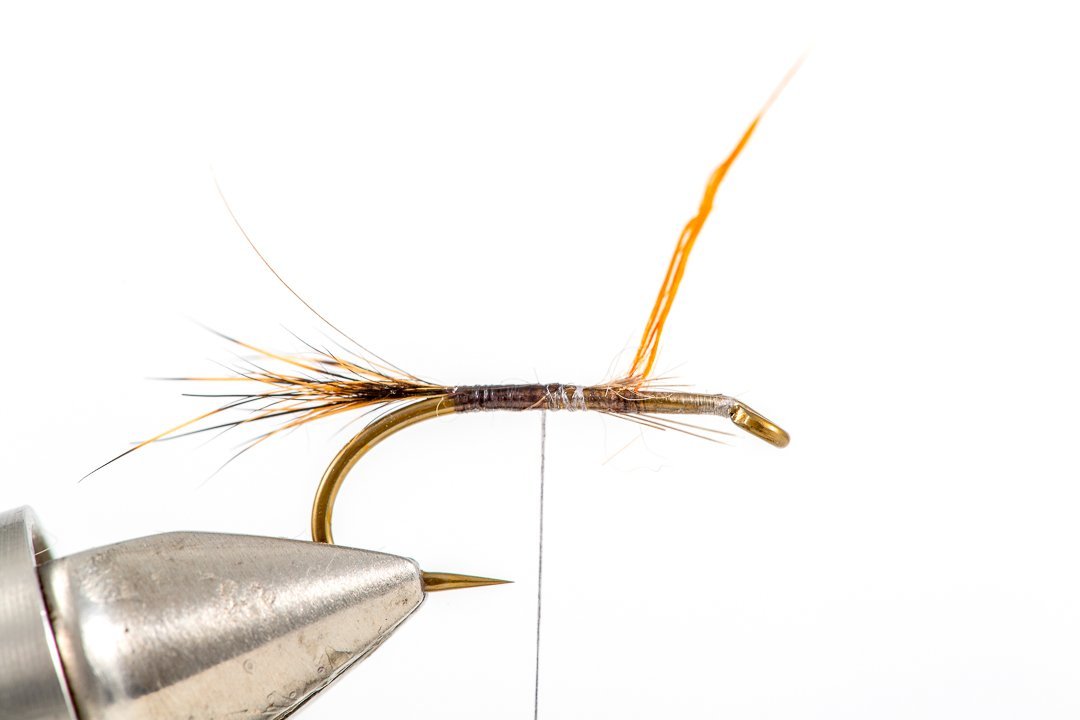 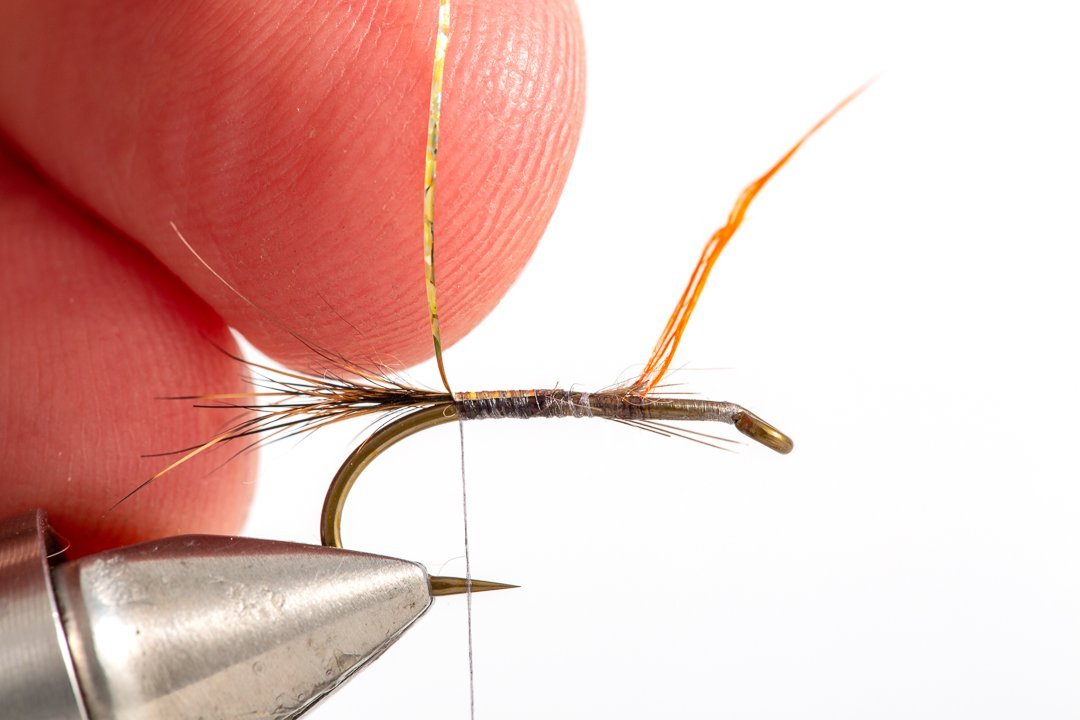 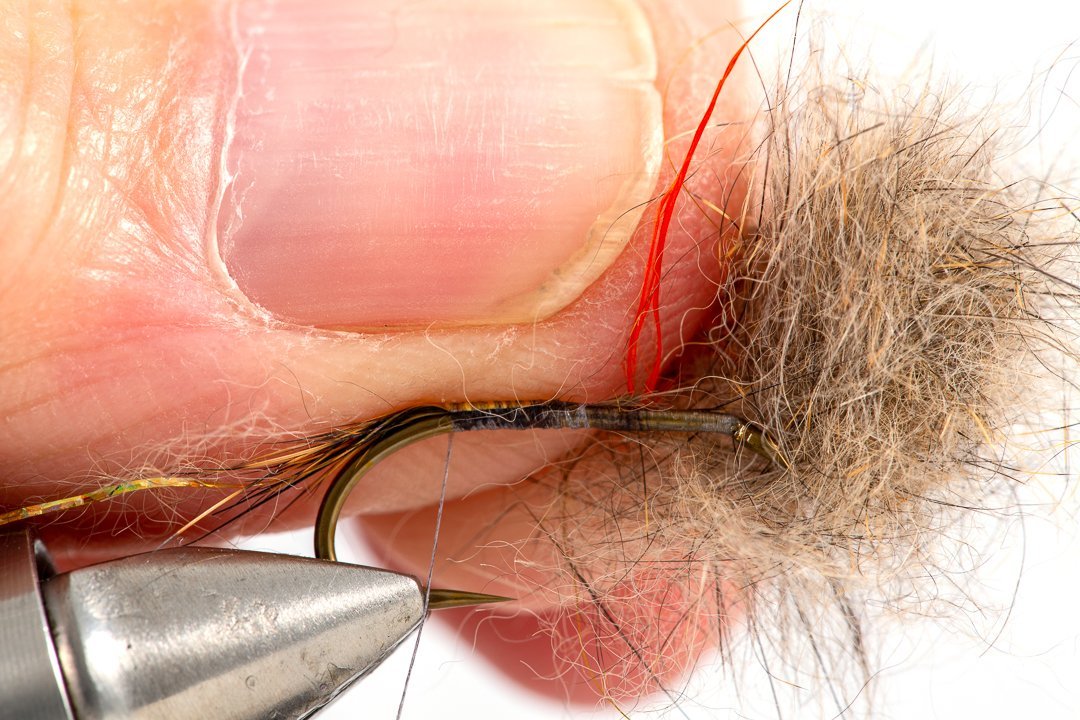 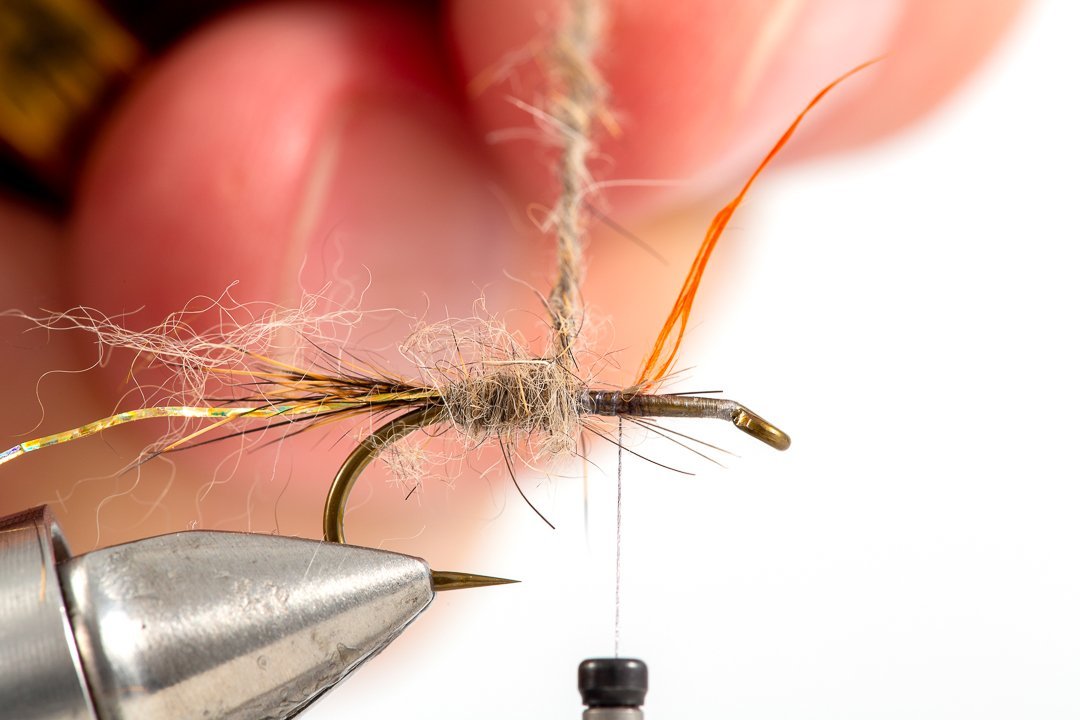 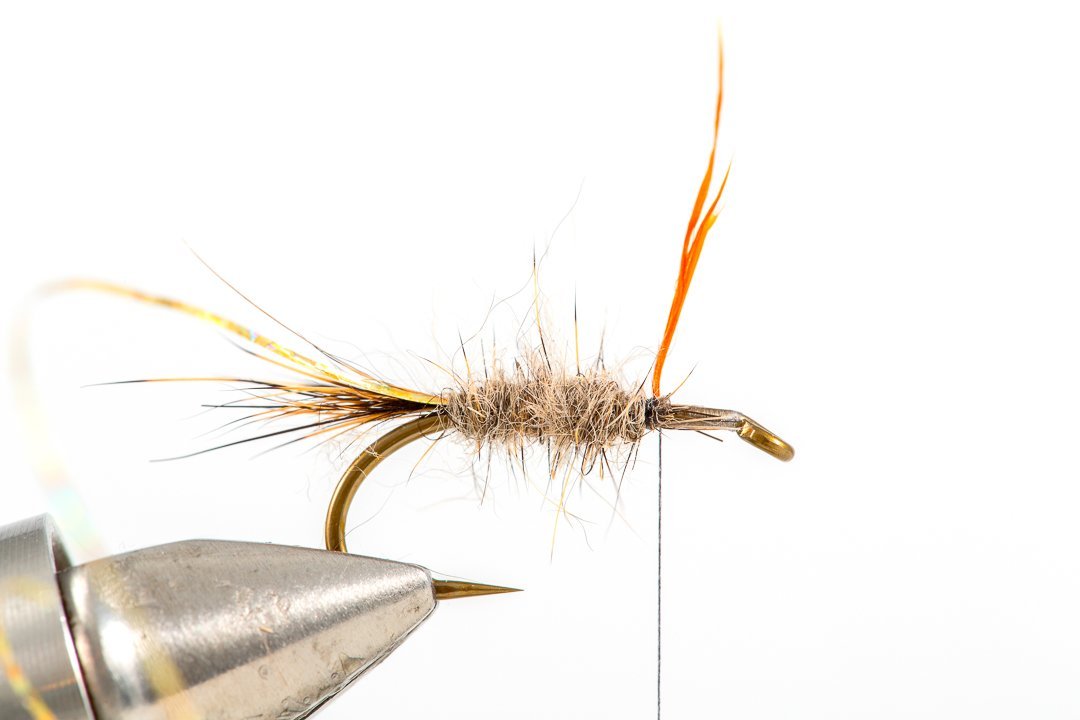 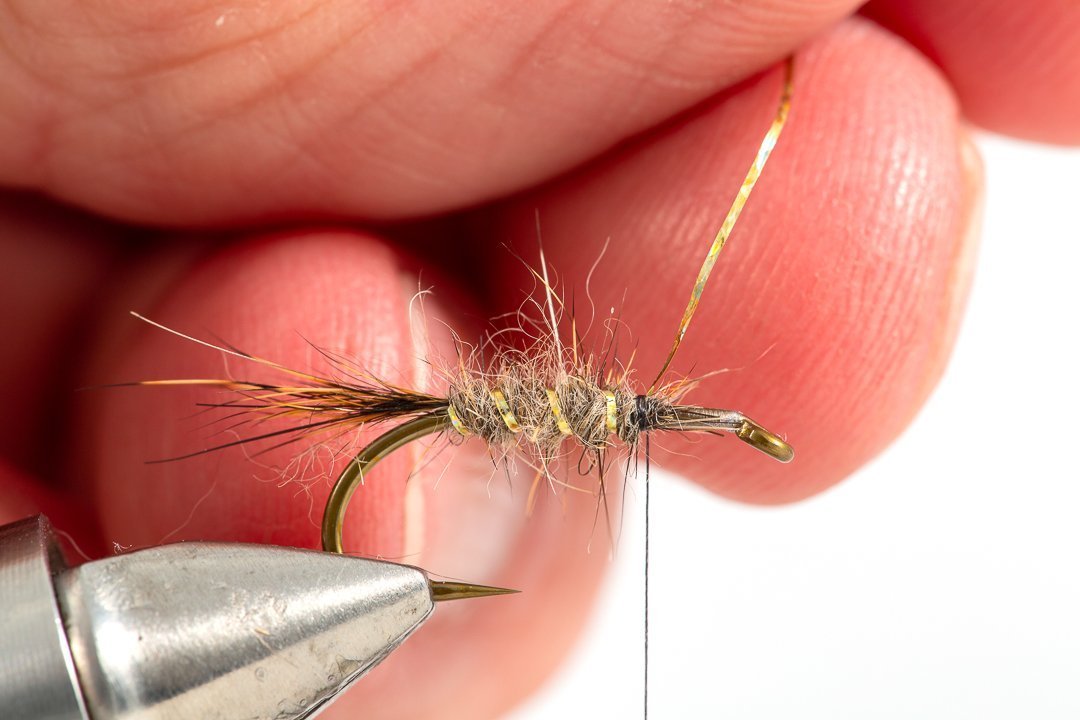 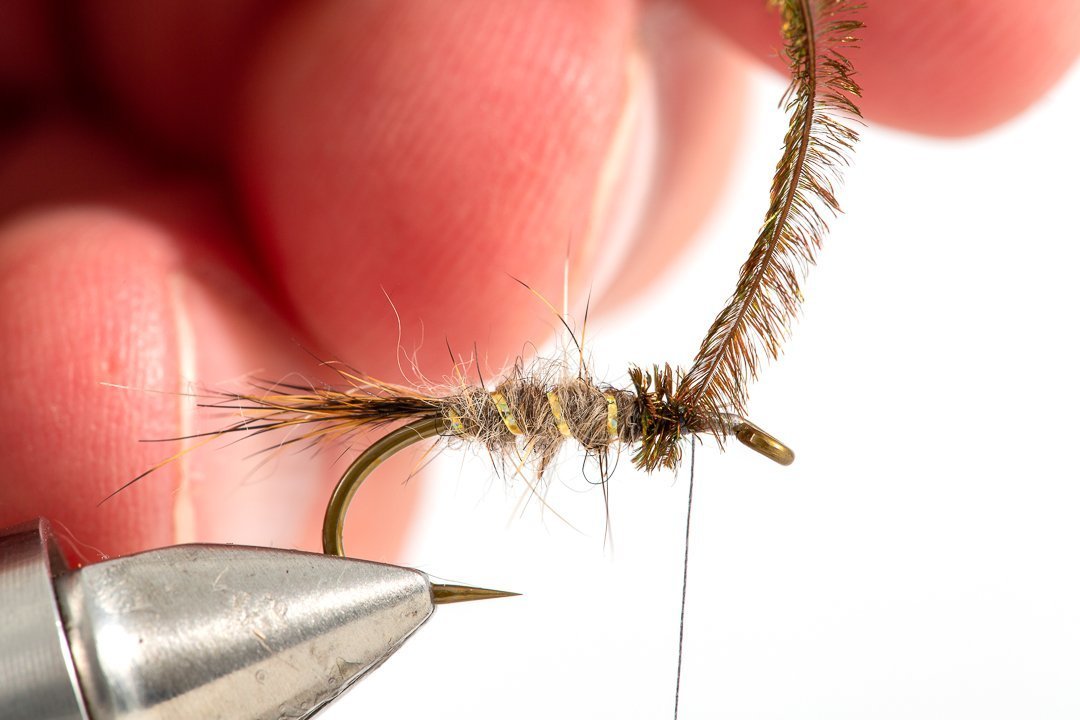 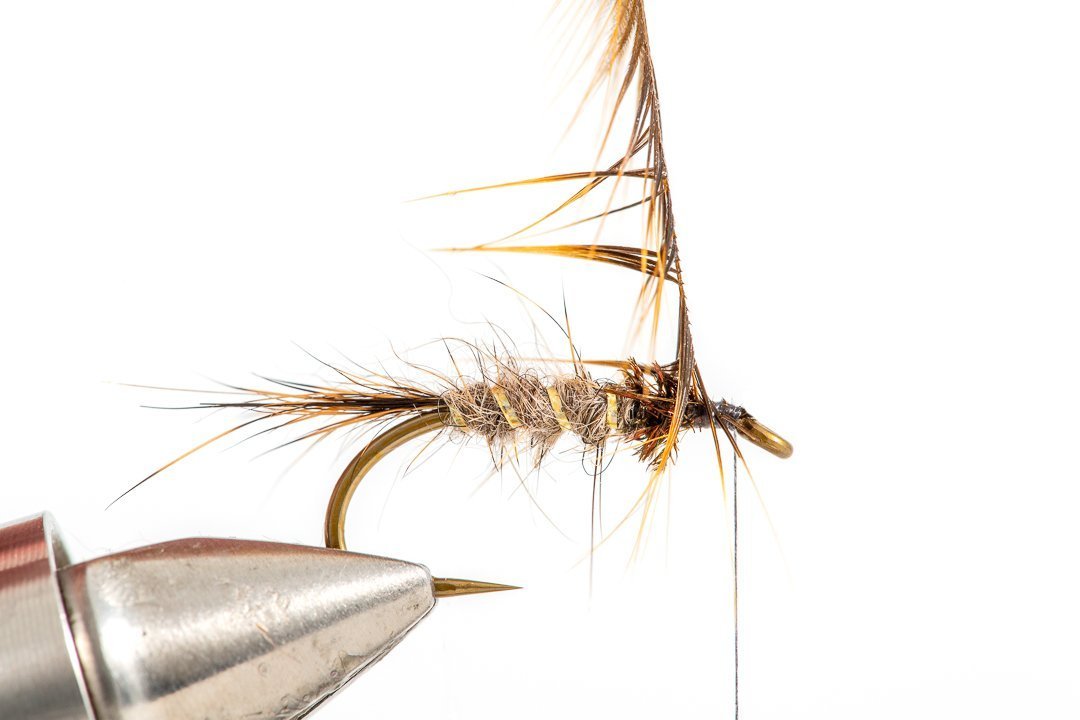 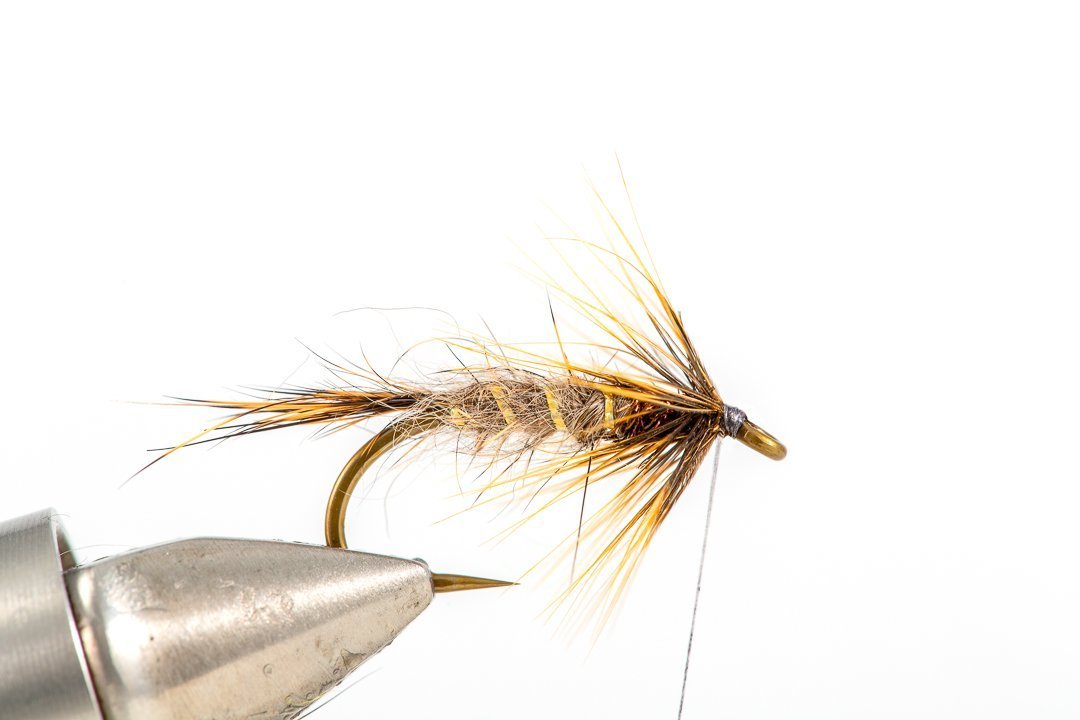 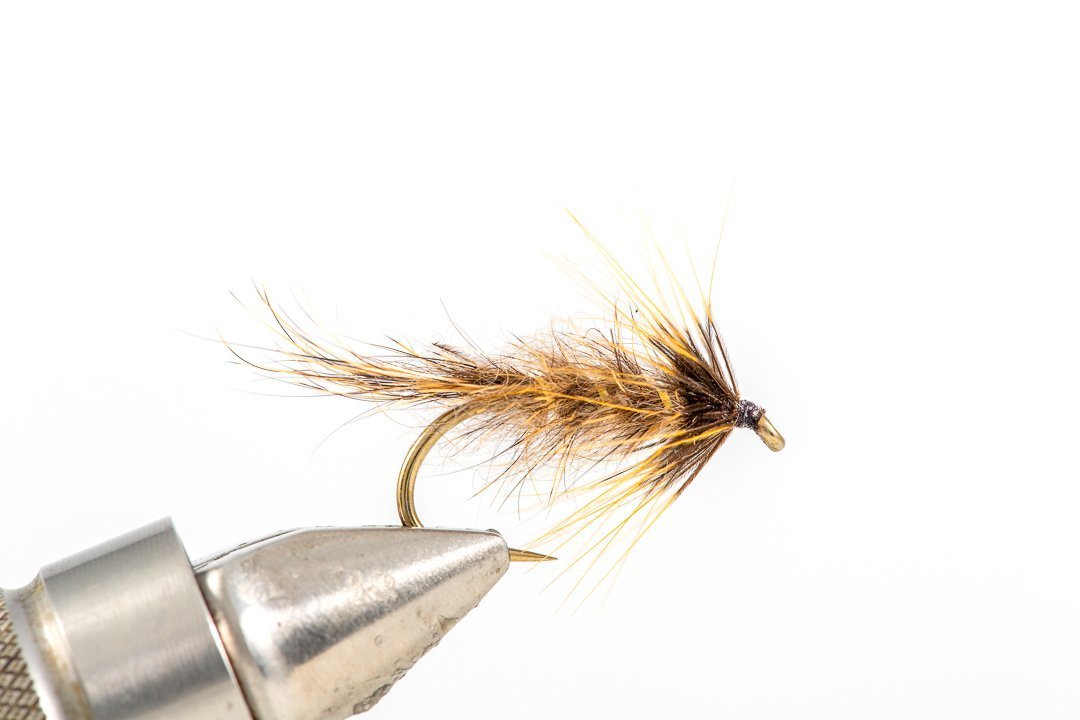 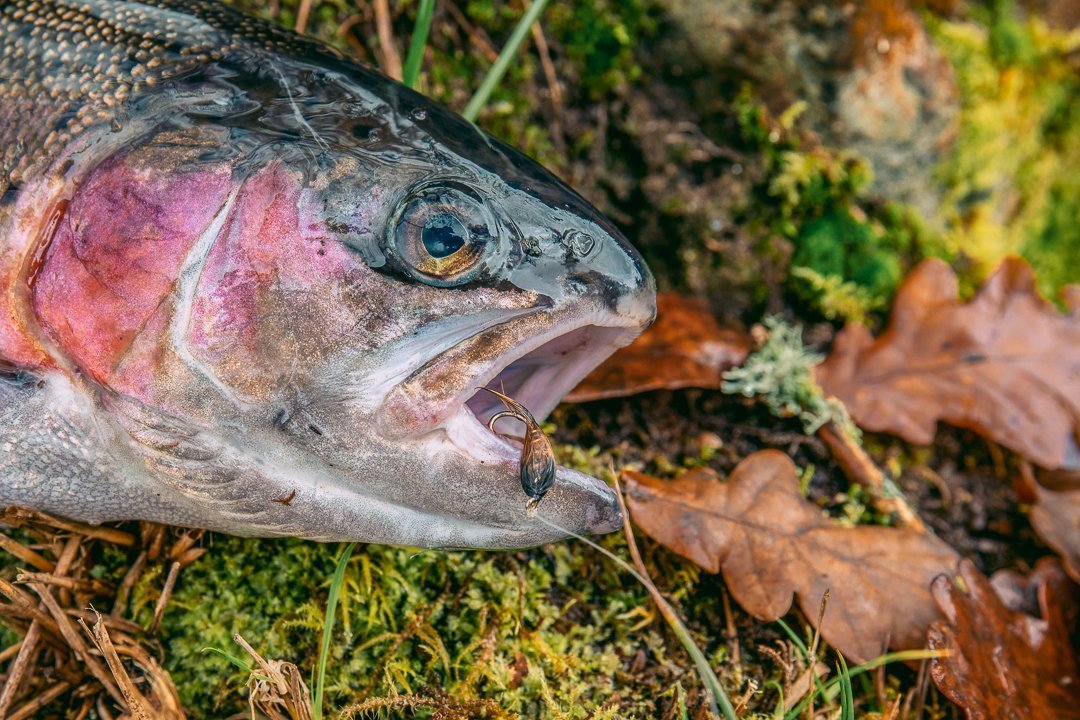 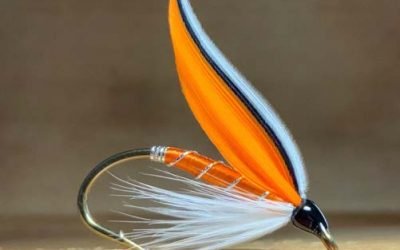 The Art and History of Fly Tying

My journey in pursuit of trout with the fly began 45 yearsago with a new fly rod and instructions to cast and drift afly. What a gift that was. The woods and waters ofPennsylvania, the Appalachian Mountains and beyondhave brought a life of admiration for the... 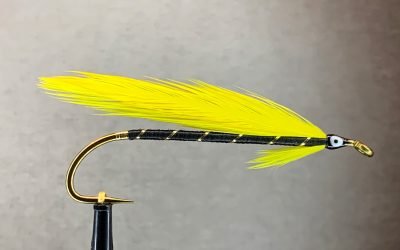 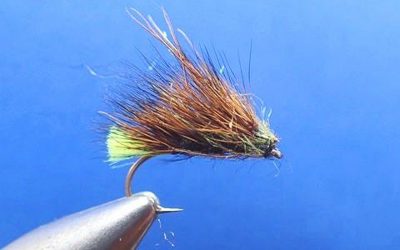 The Kate McLaren is a fly I’ve sung the praises of many times before and the competition borne green-tailed version was one of many variations that came about, however, it’s also one that’s survived and is present in many wild anglers fly boxes. Using “Glowbrite...