Throat:  Red synthetic or bucktail hair as long as the hook 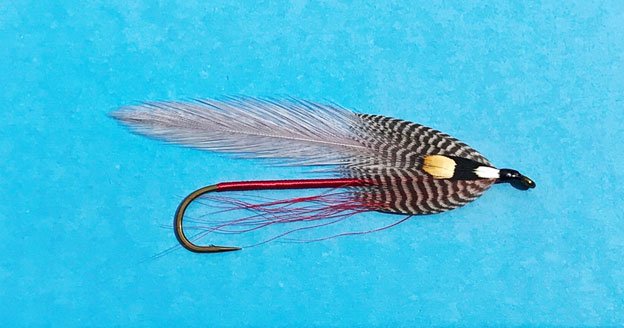 Trolling for Landlock Salmon is a rite of passage in the northeast.  As the ice disappears on the lake’s, anglers’ brave icy water, cold winds as well as snow, sleet and rain in pursuit of these fish.  Angler’s usually have a short window to catch landlocks when the ice fades from the lakes and the smelt (baitfish) are running close to the shore and near the waters surface.

As the smelt in a lake go so go the salmon.  If the smelt are plentiful then the salmon will often be healthy.  This spring on one outing with a friend we were trolling in less than five feet of water and each time we passed a small feeder brook (loaded with smelt) we each had hook ups on our flies.  It was in our opinion a banner day that we still are talking about.

Salmon tolling anglers are very passionate, secretive and opinionated about their pursuit.  They go to great lengths to protect their fishing spots and the flies they are using.  Recently I was instructing a fly tying class when someone came to me asking about the Purple Smelt fly pattern.  The pattern was popular many years ago but had faded away for other more modern patterns.

I explained that my research on the fly had uncovered two interesting facts.  It was an extremely effective fly pattern on Lake Sunapee in NH and it was a fly that was originated by Ora Smith a tyer from Keene, NH.

This required more research which I was happy to take on.  I knew the fly pattern was listed in Dick Stewart and Bob Leeman “Trolling Flies for Trout and Salmon”.  Additionally, I had seen a video of Ora Smith and he mentioned the fly, its popularity and effectiveness on Lake Sunapee.

Smith was noted for using synthetic bucktail on flies and I can only guess that being a frugal tyer he had that material readily available.  I use real bucktail on mine because the synthetic material available today is not the right shade of red.  The fly calls for lavender saddle hackles.  The few times I had seen the fly tied it was more of a deep purple not a lavender.

A friend of mine who is a local librarian and angler had a handful of old Ora Smith flies that her dad had purchased many years ago.  She put together a number of them she wanted to give me and interestingly enough there was a purple smelt among them.  The wing was the lavender color listed in the pattern recipe.

I dug through my bins looking for lavender only to come up with a few stray saddle hackles from the 1960s that had seen better days.  I looked everywhere for that shade of feather and came up short.  Using the few feathers I had I tied the fly, carded it and had it with me at a few tying shows.

This is where the story gets interesting.  An older angler was looking at my flies when he picked up the Purple Smelt.  He looked at me and said….”where did you get this”?  I explained I tied it and used a sample from the flies’ originator.  “The guy from Keene, NH” he asked?

I explained the story to him and then he shared much more with me.  He told me that this was “THE FLY’ for fishing on Lake Sunapee.  In fact, he went on to let me know that the bigger trout and landlock salmon that were caught on the lake were with this fly.  Then he said the fly dropped off the radar when Ora Smith died.  He too felt that the lavender color was hard to find.

I have been working with Ewing Feather Birds on a series of feathers they are marketing under my name.  In one conversation with them I mentioned the lavender and sent them the exact shade.  They hit a homerun and matched it perfectly.  I began tying with the feathers and always having a few Purple Smelt on my table at shows and presentations.

In April of this year I did a talk on salmon flies for New Hampshire Fish and Game as part of their Adventure Talk series.  One of the slides I showed was of the Purple Smelt.  Again, someone made mention of the fly’s effectiveness and how it had disappeared from the local shops.

Then a few months later I was doing a tying demonstration at the south end of Lake Sunapee when a person came to my table and specifically asked me about the pattern.  His story was that his father and grandfather had used the fly on the lake and how great it was.

Now in my mind I had too many people who had said the same thing to me for there not to be some truth to it.   Often my research on older patterns it would lead me to way too much hearsay to feel good about a fly’s history.

The one small question in a fly tying class had lead me on a path of discovery and ending with and ample supply of lavender feathers thanks to Ewing Feather Birds.  I often look at these flies and try to reason why the originator came up with it.  Ora Smith was an angler first.  He got into fly tying because the fellow he was buying his flies from stopped tying.

He fished Lake Sunapee and I can only guess he used this pattern.  Many of Ora’s flies have teal shoulders.  I’ve always found flies with teal to be highly effective. 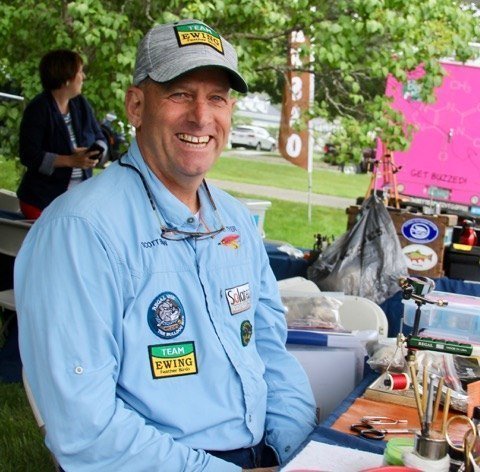 Scott Biron cut his teeth learning to tie flies and fly fish back in the1960s in the North County of New Hampshire. He has fished many of the streams north of Route 26 in NH and his favorite the Androscoggin River. Scott is an active fly tying instructor for NH Fish & Game and is popular tying and instructing in national, international and regional shows. He was awarded a 2017 NH Traditional Arts Apprenticeship Grant and studied fly tying including Traditional New England Streamer patterns and progressed to Classic Salmon Flies. Since then he has become a Master Artist in the Traditional Arts Program. He had an apprentice working under him during 2021.  Scott has a strong interest in historical NH fly tyers and their lost patterns and has published, researched, instructed as well as demonstrated many of these lost NH fly patterns. He enjoys instructing individuals of all ages in the art of fly tying and is known for including the history of these tyers and their flies in his instruction. Scott is considered an expert on large group instruction and offers dozens of classes year round. Each year he is an volunteer instructor at NH Fish & Game's Camp Barry's Fish Camp where he instructs over 50 campers in fly tying and fly fishing. Scott is a member of the Catskill Fly Tyers Guild, an Ambassador for the American Museum of Fly Fishing.  He is a regular contributor to the Fly Dressers Guild Journal and the NH Wildlife Journal.  Scott is on the Partridge of Redditch, Sprite Hooks, Cortland, Riversmith and Ewing Feather Birds Pro Teams.  He is on the Ambassador Pro Team for HMH Vises. Ewing has come out with a signature series line of feathers under Scott’s name.